The Commodore 116 was a computer released as the cheapest Commodore computer ever released, and to contend with the Sinclair Spectrum.

The Commodore 116 was inspired by both the Commodore 16 and the ZX Spectrum made by Sinclair, which was dominating the personal computer market in the UK. As a result, the Commodore 116 was designed with a minimalist approach. It used a 1.76MHz MOS 7501 CPU and had 16K of RAM. It features a small rubber keyboard just like the Spectrum, in order to keep the cost as low as possible.

Despite being rather cheap for a Computer of the day, the commodore 116 saw very little success and was discontinued within a year of its release. 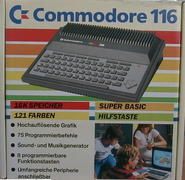 The Commodore 116's box.
Add a photo to this gallery
Retrieved from "https://commodore.fandom.com/wiki/Commodore_116?oldid=170"
Community content is available under CC-BY-SA unless otherwise noted.